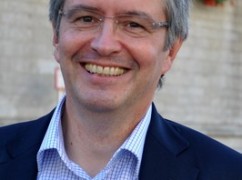 Prof. Dr. Paul Lemmens (born 1954) is the founder of the Faculty of Law’s Institute for Human Rights. He is currently the Belgian judge at the European Court of Human Rights in Strasbourg, France. He  studied law at the University of Antwerp and at KU Leuven and obtained his law degree (“Licentiate in Laws”) in 1976 (magna cum laude). He subsequently obtained an additional Master’s Degree in Law at Northwestern University, Chicago (1978). In 1987, he obtained his PhD (“Doctorate in Laws”) at K.U.Leuven, with a thesis on “Disputes about civil rights and obligations. The scope of application of Article 6 § 1 of the European Convention on Human Rights and Article 14 § 1 of the International Covenant on Civil and Political Rights”. Paul Lemmens began his academic career as a research assistant in constitutional law (1976-1977) and civil procedure (1979-1986). He was subsequently appointed professor (1986) and in this capacity he has taught international human rights law (since 1986), civil procedure (1986-1995), administrative procedure (1995-1997) and constitutional law (1997-2008).

He was also a councillor (judge) at the Belgian Council of State (Supreme Administrative Court) (1994-2012) and a member of the UNMIK Human Rights Advisory Panel in Kosovo (2007-2012).

Paul Lemmens was also a member of the Council of Directors (1997-2012) of the European Master’s Programme in Human Rights and Democratisation, based in Venice. He was president of the Flemish Interuniversity Center for Human Rights (1992-2005), a member of the Commission for Legal Science of the Fund for Scientific Research Flanders (1995-2006) and a member of the Association for the Comparison of the Law of Belgium and the Netherlands. He has served as an expert for Belgium on the group of legal experts of the EU Fundamental Rights Agency (2008-2010).

He was a visiting professor at Northwestern University (1999), where he worked in close collaboration with Prof. Dr. Douglass Cassel. He has been an ad hoc judge in the European Court of Human Rights in four cases against Belgium (judgments handed down in 2000, 2002, 2003 and 2009).