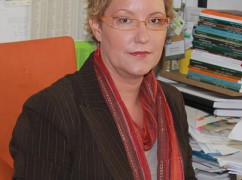 Petra Roter has received her PhD from Cambridge University (Centre of International Studies). She is an Associate Professor of International Relations at the University of Ljubljana, Faculty of Social Sciences. Previously, Petra Roter was a GARNET Visiting Fellow at the Centre for the Study of Globalisation and Regionalisation, University of Warwick, a Junior Research Fellow of Hughes Hall College, University of Cambridge, a DAAD Visiting Research Fellow at the Eberhard-Karls-Universität Tübingen, and a Research Associate at the European Centre for Minority Issues. In 2010, she was elected by the Council of Europe’s Committee of Ministers to the list of Independent Experts to serve on the Advisory Committee of the Framework Convention for the Protection of National Minority. As an independent expert, she has also co-operated with the OSCE High Commissioner on National Minorities. She has authored, co-authored and co-edited three book, has written numerous book chapters and journal articles. She is a co-editor of the SCI-listed Journal of International Relations and Development, a member of several editorial boards.

Associate Professor Petra Roter teaches a number of undergraduate and graduate courses on International Relations, Protection of Minorities, Human Rights, International Conflict Management and on academic writing and research. She teaches at the University of Trento (within a joint MA programme in Comparative Local Development) and has taught a part of E.MA’s course on democratization. She supervises BA, MA and Ph.D. theses addressing various ethnic issues.

2001: “Locating the “minority problem” in Europe: a historical perspective”; Journal of International Relations and Development 4(3), 221–249.

Associate Professor Petra Roter serves as an independent expert on minority issues in the Council of Europe, the OSCE HCNM, and in Slovenia.

Link to a detailed CV